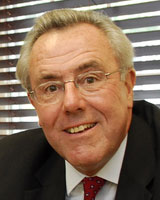 John (Jack) Fath graduated from Fordham College in June of 1968 with a Bachelor of Science Degree in Psychology.  During his college years he ran the mile in under 4 minutes and was a member of the Men’s All-American Track and Field Team.  He was also a member of Who’s Who in Colleges and Universities in America and received the Eastern Collegiate Athletic Conference Student Athlete member.

From there he went to Fordham Law School in Lincoln Center and graduated in 1979 with a Juris Doctorate Degree.

Since then Jack has been an Assistant District Attorney in Suffolk County, where he was a Deputy
Bureau Chief and tried Felony Cases from March of 1975 to January 1978.  Thereafter, he became the Deputy Town Attorney in Brookhaven Town where he worked from February 1978 to December 1979.  Jack opened his private law practice in Patchogue in January of 1980 and has been practicing law in Patchogue ever since.

Since entering private practice and in the last 34 years Jack has handled various types of matters including matrimonial, real estate and all types of civil litigation, including Will and Trust.